Chapter 35: Fifth day of being an untouchable flower 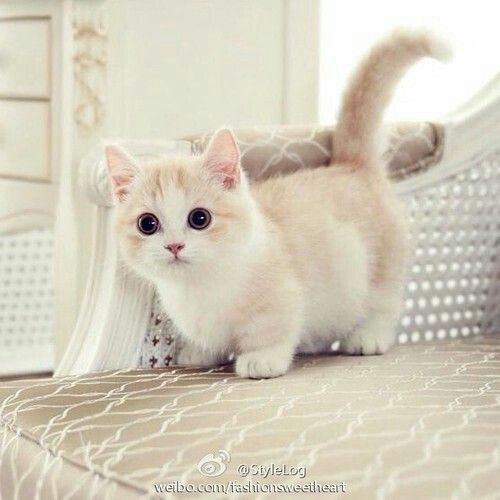 look at this round boi one reader shared ;u;;

The cold-faced cultivator was holding a small kitten with great care in his bosom. There was no need to mention how shocked those disciples who saw this were.

Who in this sect did not know that this peak master was extremely cold and hated people getting close? If anybody dared to get anywhere as close as a meter to him, his whole body would exude an icy aura.

Were animals an exception to this?

The sight of the young man’s hand on the cub’s back that seemed to be soothing the cub could even be described as tender. The impression these disciples had of their peak master subtly changed after seeing this scene.

He suddenly did not seem as distant and unapproachable as before.

“Shifu, this disciple has not seen Jiang Tan Shidi in the Wen Yun Platform for the whole of this morning and feels extremely worried. Does Shifu knows if Shidi is unwell today?” The disciple in front of him who had just finished receiving some martial arts guidance lowly asked.

The young man in front of him was the shifu who he spoke of and because of this, it was only normal for him to ask this question out of concern.

However, the chief disciple clearly knows that the youth does not care about the person he was speaking of.

“Don’t know.”  Gu Yan replied shortly and coldly in order to not differ too much from the original personality of this body.

Gu Yan rubbed the seemingly round and soft little ball in his bosom a little, feeling like he had indeed raised this ball well.

This newborn ignorant state would probably last about a month or so. In this one month time, it was probably enough to fatten this it up.

Although its torso now looked a little round and felt meatier, in reality, it’s actually all just fluffiness. When it grows up, it will definitely not be as round anymore.

“This…” The chief disciple hesitated for a while and then continued: “Although Jiang Tan little brother had done something wrong, he is still young. As long as he is willing to repent, he should be forgiven. However, it seems like shidi is skipping classes now, isn’t this too much…”

In the end, his words grew fainter for the disciple suddenly perceived a cold gaze that landed on him. A pair of pupils that were fixed on him gave him the feeling of a prey being stalked. At any moment, he could be ripped to shreds.

Feeling the immense pressure, the chief disciple froze in terror and could only feel cold sweat dripping down his back.

This kind of fear could only be caused by who knows how much of a difference in their cultivation levels. The pressure disappeared too quickly and the disciple that had just experienced the feeling of being gripped by terror almost thought it was an illusion.

But the little kitten in the youth’s arms was only a cub, how could it possibly emit such a frightening pressure?

Moreover, everybody else looked fine and the disciple could only assume that it was an illusion.

This person was speaking ill of him in front of the person he likes, even if the cub had not yet regained its memories, it was able to clearly understand this.

“I’ve already sent him on an errand.” That disciple will not be able to appear for at least a month. If he continuously missed morning practices, it was bound to stir up some speculations and hence Gu Yan had already thought of an excuse earlier on.

Saying this, Gu Yan tilted his head downwards. He did not know why but the little ball in his arms suddenly started acting up, even the sound it was making…

“Be good.” Whispering these words, Gu Yan soothingly comforted the little ball, stroking the furry head and coincidentally brushing past the little ear that had perked up.

Mewing lowly for awhile, the young cub narrowed its eyes and finally quietened down. At first, the small cub intended to remember the face of the man who dared to speak ill of him and wait until he was grown up to swallow him into his belly.

This Taotie cub has always been very vengeful and was the type to return the favor a hundredfold. Just like today, he will remember how this person slandered him and in the future, he would let this man repay this debt with his blood.

However, the young man holding him just said “be good” and touched his head.

He will be good as long as it was what this person wants.

Had been assigned a task… this answer immediately let the chief disciple choke for a moment,. This was completely unprecedented.

“What you said just now was jumping to conclusions and completely nonsensical.”

Just as he ordered, the inner sect deacon will very soon find out the truth about the matter, even if he was merely concerned about his own deacon’s position.

Since he was the one raising the cub now, he would, of course, ensure that his innocent disciple was not wrongly accused of crimes he did not commit.

“…Understood.” Hearing the young man’s cold voice, the disciple was afraid to speak further on this subject.

In the end, he wanted to be accepted as a disciple and does not want to leave any bad impression in the minds of the youth. Gu Yan glanced at the chief disciple a few more times. If he was not wrong, this disciple should be called “Lin Yi”.

He remembers having written such a supporting character, in addition to his original body, this person lent a helping hand in pushing the young villain towards his blackening.

Apart from this little bump, the rest of the day could be considered smooth sailing.

Even though it was pretty last minute, this was still a world he had created and with some theoretical knowledge, fooling a few people was not a problem.

Gu Yan showed a face of indifference towards the surrounding disciples who were looking at him with an expression of enlightenment, admiration and what not.

Spending a whole afternoon on cultivation technique guidance, the sky started to darken. Gu Yan then told the disciples in front of him, “Today ends here.”.

However, some of his disciples eyes were still bright, as if they didn’t want to stop practicing at all.

Gu Yan did not know that the theory of the five elements he had used to bluff them had greatly stirred the hearts of these disciples.

Those who were better able to comprehend directly broke through the bottleneck of their cultivation during practice. Of course, they also practiced extremely hard.

Most of the disciples continued to practice, but Gu Yan left decisively. He did not really care but the small cub in his arms …

The little ball should probably be hungry by now.

Silently thinking of this, Gu Yan then stretched his hand to feel the little cub’s belly. Compared to when it had just eaten, this belly felt flatter now. Previously when he rubbed the belly, it was a little round, of course, it was still round now even if it had sunk a little.

In the future, he should carry some snacks on him at all times.

Returning back to the peak, the cub that had been wrapped into a dumpling quickly crawled out from under the thick layers. It climbed onto the legs of the youth who was sitting on the bed before quietly lying down.

In the eyes of the cub, the numerous layers of padded clothing were not as warm as this youth. Although it was not actually afraid of the cold, the cub still liked the feeling of lying on him.

Towards this sort of behavior, Gu Yan had already gotten used to it.

A month was neither long nor short. This small ball had stuck to him for roughly a month or so. When this cub regains its human form, he probably will not stick to him anymore.

“Meow.” Looking up at the youth who seemed to be in deep thought, the small ball purred loudly and arched itself nearer to the youth.

The immature mind of this ignorant cub was trying to figure out what this person was thinking about.

He wanted to get closer. If the youth tells him to “be good”, he will listen and be very obedient. However, the cub had a vague feeling that there should originally be two more syllables in front of his words.

Perhaps if he was a little bit more well-behaved, this man will say it to him.

T/n: In case you can’t guess for whatever reason, the two syllables is ‘Qiuqiu”