In the Abyss, a human was seating in the Demon King’s throne that was a symbol of the highest power. The demons who had been killed by the adventurers had resurrected by now. Currently, in the deepest part of this huge palace, the resurrected demons could not understand what they were looking at.

Their character settings were to kill all invaders, but their king had allowed a human to sit on his throne. Instead of attacking this human, his head was slightly bowed towards the human being, allowing the weak human to touch the horns that were representative of their identity as a demon.

This kind of resurrection is called ‘refreshing’. Without their previous memories, these monsters who are constantly killed by players will be refreshed and revived under the light brain settings and will always stay at their posts.

Despite knowing that these NPCs are just ordinary data and are not as self-conscious as the Abyss Demon King whose horns he was currently touching, being stared at by so many demons who had revived so suddenly made Gu Yan pause.

Noticing the youth’s reaction, the Demon King’s lips moved slightly, and the pair of dark purple irises narrowed a little.

Soon, the demons no longer stared at the throne.

“They won’t look over here anymore.” The pale and beautiful face held a fatal attraction. When the Demon King of the Abyss used his deep purple irises to focus on one person, it was more fatal than when a succubus uses a charm spell, simply irresistible.

To slightly modify the monster’s settings took him less than a second. As long as he can make this person happy, the highest existence that dominated the world will not hesitate to carry out such violations of rules and tampering of settings.

He was the one who made the rules or it can be said that he is the Rules.

“Keep touching.” The Demon King blatantly expressed his need as he moved closer to the youth’s neck as if he was trying to increase his favorability. The arm that was around Gu Yan’s waist also tightened.

Feeling the soft black hair brushing against his neck made Gu Yan ticklish. Now that he was touching the Demon King’s horns, his mood was slightly complicated.

The Qiuqiu in this world seemed to be particularly honest, not hiding his thoughts from him, and the things that he said was… very cute.

Thinking of this in his heart, Gu Yan suddenly had the urge to do something. However, in order to not cause more disconnections, Gu Yan first mentioned this matter to him.

His main concern was that this abnormal situation might alert relevant personnel which will not be good for both parties. Selfishly speaking, Gu Yan would rather have the world follow the original ending.

“En, it won’t happen.” After listening to what the youth said, the Demon King lowered his head and replied in a low and slightly hoarse voice.

‘En’ was the promise that there will be no more disconnections. As for the latter part of the sentence…

Feeling that he should explain it more clearly, the Demon King looked at the human youth sitting on his throne and slowly said: “Those people will go to the company selling the game and demand an explanation.”

Noting down the list of players who had experienced disconnection and letting Asa make a glitch in the game equipment used by these players was a breeze.

The malfunction of the hardware devices such as game capsules and helmets will directly put the blame on the manufacturers. By then, the disconnections can also be explained as the fault of the equipment.

Amazing. Remembering the reason, Gu Yan could not help but fall silent. The light brain was omnipotent but Gu Yan did not expect the other person to be so skillful at making someone else his scapegoat.

The gentle touch on his head stopped again. The pale face and purple eyes demon lowered his eyes again to bury his face in the youth’s neck, whispering in a low voice: “Touch me.”

This degree of honesty was a bit foul. Touching the demon horns, Gu Yan continued doing what he had wanted to do.

“My cute Qiuqiu.” With curved eyes, the youth pulled the Abyss Demon King in front of him closer and planted a kiss on his pale lips.

The Demon’s lips lacked warmth but were still very soft.

As if he had learned something new, in a flash, the Demon King’s deep purple eyes shimmered as he pressed the youth down on his throne and stared at him intently.

“Kiss me.” The pale lips parted as he said these two words. Gu Yan had grown accustomed to the flat tone of his voice but now, his tone clearly carried traces of emotional fluctuations.

He liked to be touched by the person in front of him. It made the heart of the body he was currently using beat faster.

However, the person who clearly made his heart flutter did not respond to this request. The youth in the magician robes was leaning against the throne, his brows arched and held a trace of laughter as he had an extremely relaxed attitude.

The seductive Demon race cannot be compared with the appearance of the youth in front of him whose eyebrows were raised. In the eyes of the creator of this world, the former was not even worth mentioning, even a succubus cannot tempt him. As for the latter… If he had something like a heart, then his heart must have already been captured by this person.

Staring at the curve of the youth’s brows and pressing the youth against his throne, the Abyss Demon King lowered his head to kiss his lips. He was extremely gentle like he was his most precious treasure.

The Demons in the great palace hall stood in their posts, never looking at the throne on the platform. However, they also knew that on the throne, their king was doing something very intimate with a human.

Now in front of him, Gu Yan could only see the Demon King who was currently kissing him. However, from his peripheral vision, he could still see some demons. Although Gu Yan had already recognized them as merely NPCs in his heart, he still found it difficult to not care.

Fortunately, in the last world, he had spent several thousands of years living shamelessly with the other man so Gu Yan’s degree of acceptance of things was already relatively high.

Remembering what he said to his system before he went online today, ‘It seems that the light brain has fallen for your host’, Gu Yan did not know if he should laugh or show some other expression.

Words turned into reality, that’s probably what it meant.

He had only thought that the person he was looking for would be a plot character, Gu Yan did not think of the light brain. Now, this situation was entirely out of his expectations.

Speaking of kissing, the cool and soft touch was now trailing down his neck. When Gu Yan finally reacted, he immediately sat up straight.

He had a feeling that if he were to let it continue, something that will make him throw away all his morals will happen.

Convincing himself that all the demons around him were merely NPCs, Gu Yan could still accept the fact that he was being pressed down on the throne and kissed by the Demons King, but if they took it further, it was really too shameless …

The Abyss Demon King who had been rejected narrowed his dark purple eyes and using the most advanced and sophisticated computing technology to calculate the root of the problem, he gave in and only continued kissing the youth’s neck…..

Next time… he must first throw out all the demons in the Palace Hall!

“Qiuqiu, be good.” The demon king in front of him revealed a submissive and obedient expression that made Gu Yan unable to resist touching his horns. The rotten ending that had given him a headache before now seemed to have solved itself.

The demon king let out a low ‘en’ in response to the youth touching the horns on his head and the dark purple pupils reflected the youth’s figure, his gaze extremely focused. With a low and hoarse voice, he said: “Qiuqiu … is very good.”

Saying this, he held the youth’s left hand that had been on his horns and lightly kissed his ring finger.

Why he had kissed here, it’s because, in his knowledge, the human’s left ring finger had a very special meaning.

Gu Yan looked slightly unnatural again and gave a low cough. The Qiuqiu in this world was very…

He was unable to find an appropriate adjective, but it was the kind of feeling that made him easily touched, especially obedient, especially cute …?

[Ding, Hunger value has reached 87.] Receiving the system notification, Gu Yan opened his character panel to take a look and sure enough, his Hunger Value column was already flashing red.

This value indicated a player’s physical state in reality. Players still had to go offline to eat their three meals if a nutrient agent is not stored in the game capsule.

Everything in ‘The World ‘ could not escape the light brain’s notice. Understanding what the notification represented, the Abyss Demon King tightened the hands that were around the youth’s waist.

“I’m only going to go offline for a while and will be back soon… Qiuqiu, be good.” Feeling the arms around him suddenly tighten, Gu Yan understood the reason and gently touched the demon’s head to coax him.

The demon pouted his pale lips. He certainly knew that going offline meant that this person was going to another side of the world that he could not reach.

Forcing himself to drop this idea, the demon loosened his hold on the youth’s waist. No matter what ideas he had, he will not do anything to hurt this man.

“But outside, I cannot see or touch Ah Yan anymore.” the demon king lowered his eyes and frowned.

It was easy for the light brain to know a player’s name and Gu Yan was not at all surprised to hear his name from the other person’s mouth.

“There’s a camera in the living room, can’t Qiuqiu use it to see me?” Without thinking, Gu Yan threw this sentence out.

The light brain was not only able to dominate this entire virtual world, it can even dominate the real world if it wanted to. The other person clearly did not think of this, but since it was his family’s Qiuqiu, it doesn’t matter if he reminded him.

“En.” He narrowed the deep purple eyes that were almost like ink. As long as he can continue to see him, the master of ‘The world’ was satisfied.

So easily coaxed … Pulling the Demon King closer, he kissed the demon’s horns and then in the virtual panel, he clicked the log off button.

Wanting to see him was easy and it was actually not difficult to touch him… Sitting up from the game capsule, Gu Yan raised a hand and rubbed his eyes. Later on, he will have to prepare a present for his lovely Qiuqiu.

Author: is there any little angel that can guess what is the gift?

T/n: Here’s more cats with horns courtesy of so many people offering me cat pics ^O^ my comment section has been blessed once again 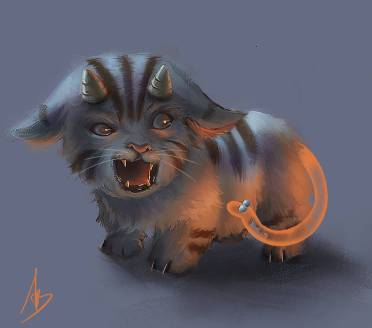 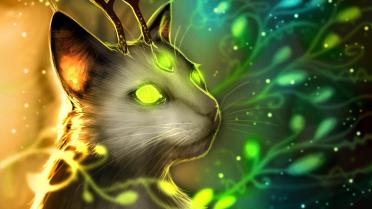 If you enjoy my translations, you can consider supporting what I do