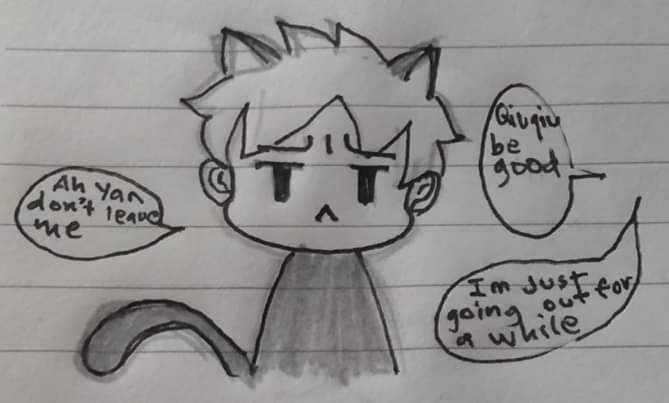 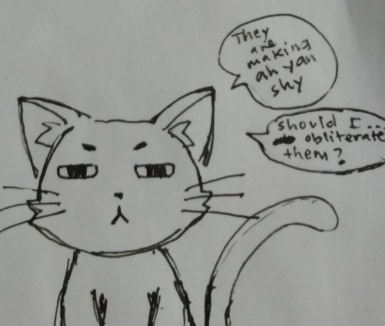 Their king had proposed marriage to one of the human race, and though he hadn’t given that person a chance to decline……he had even put the ruler’s ring onto that human. This was equivalent to announcing that the human was now the second Lord of the Underworld.

“What is the relationship between this human and the Abyss Demon King[1]?” An alluring female demon asked, her brow twisted. She was originally intending to drink some fine wine, but now the mood was gone.

They could disregard their lord falling for a living being. As long as their lord was happy, it was fine. However, the mark on that human’s neck seemed to suggest that he had some vague relation with the Abyss Demon King.

Unable to answer this question, the undead knight who had been preparing to make a toast with the former raised his glass and sipped a mouthful, shrugging his shoulders. “At worst, if we come to blows with those demons of the Abyss, we are already dead anyway. If we rely on the reincarnation pool, we can respawn again but the demons cannot.”

These subordinates, for their superior, worried their hearts to the point of breaking while the black-haired god brought the only living human in the underworld to his shrine.

The Death God’s shrine would definitely not have the appearance of tranquillity and holiness. There was no golden illumination from sunlight, nor holy knights in stately armour guarding it in formation. This whole shrine was chilling, ice-cold and silent.

Gu Yan lifted his left hand and examined the signet ring on his ring finger. It was the same material as the black crystal box that he had touched before, and he could see the item information——

Alexis Birthstone; the BOSS of the Underworld’s signet ring.

Now understanding the thoughts of his subordinates, when the Death God bowed his head to look at the ring, he said slowly: “It is not a marriage proposal.”

When the youth turned to look at him, a glimmer appeared in the Death God’s dull, pitch-black eyes. His eyes half-lidded, the cold, handsome face became gentle, yet after kissing the youth’s earlobe, the words that he said couldn’t be related to ‘gentle’ in any sense: “Ah Yan, you have always been mine.”

“We were already married, now I’ve added a ring.” Tucking his jaw into the youth’s shoulder, the BOSS of the Underworld narrowed his eyes slightly. Like an extremely dangerous large cat that had become docile, from time to time, he would rub his forehead against the body of the person he liked, demanding attention.

With this feeling of being stuck with a large, clingy cat, Gu Yan raised his hand to stroke the head full of soft black hair, nodding thoughtlessly.

There was nothing to argue about in the first place, they had already done the most intimate things who knows how many times, marriage was merely……

The other had indeed proposed to him earlier on and he had also agreed, in the first world at the very beginning. To call them ‘already married’ was really not wrong.

If nodding a little could really make the other so happy, then Gu Yan was very willing to do these sorts of things.

“There is also a reincarnation pool here……?” Observing and walking into the deepest recesses of the shrine, Gu Yan was surrounded by huge runestones and once again saw a secluded pool that emitted a dark glow.

The Death God’s power was connected to this pool of reincarnation. During the third stage of the boss battle, this point had also been revealed. As the creator, the possibility of there being two pools of reincarnation had completely slipped Gu Yan’s mind.

Having been asked this question, the black-haired god quickly blinked his pitch-black eyes, his pupils dilating. His exterior and voice remained unaffected, and he gave a low ‘En’.

“Does Ah Yan want to go in and look?” The low, icy voice talked unhurriedly, the owner of the voice narrowing his eyes at the youth in front of him.

Gu Yan blanked, why didn’t he know that there was something else under the pool of reincarnation…….

Gu Yan nodded his head. Since they’d already come here anyway, it would be a waste to leave without looking. As an author, he was always brimming with curiosity towards new things.

Then, as he anticipated, ‘going in and taking a look’ consisted of arriving at the space separated from the pool, at the bottom of the pool of reincarnation. Light and shadow intertwined, with countless souls emitting faint blue light and circling around, above. There were so many of them, that it seemed like the space above was practically adorned with a strip of the resplendently incandescent Milky Way.

It was truly such a beautiful sight that Gu Yan couldn’t look away, his eyes filled with appreciation.

However, this beautiful scene didn’t last long. The shadows in the sky steadily covered up the lights, and gradually the disjoint space darkened.

When a human is deprived of their vision, their sense of touch would become exceptionally sensitive. In the darkness, Gu Yan clearly felt himself being enveloped by a cold body, and something cool and soft gently brushed against his neck.

“Is this alright now, Ah Yan?” The low voice that echoed within the dark space was very deep and slow, and the gloominess had not the tiniest effect on the owner of this voice. His dull, pitch-black eyes were fixed on the youth who had a dazed expression as a result of the sudden darkness.

As if he was gazing at his most precious treasure, he was full of deep, unspeakable possessiveness.

[1] Once again, death god and Abyss Demon King are different. The BOSS of the underworld (the one GY is currently with) is the Death God. The reason why the undead are shooked is because they think GY got something with the Abyss Demon King and thinks he’s cheating.